You don’t need another grain cart or truck

You don’t need another grain cart or truck.

Today producers are focused on increasing harvest efficiency even more. To accomplish that, they are purchasing bigger, better, faster combines – John Deere X9? And while that combine should allow farmers to tackle more bushels and more acres per day, thus increasing acres harvested, there’s something still holding them back – the harvest bottleneck. The grain cart, or multiple grain carts, fill up fast and trucks, for various reasons we all know and hate, aren’t available to offload into. The bigger, better, faster combine STOPS.

The solution (see Dodds First Principal for Profitable Grain Production for details) is to always keep the wheels turning on the combine and the grain moving away from it. This can’t be accomplished by buying a larger grain cart,  or more trucks, or a bigger combine. It’s a producer’s grain storage and handling system that needs to be bigger, better and faster. The Walkabout Mother Bin meets that need and then some.

Mother Bins have been field-proven in Australia since the 80’s when, out of farmer’s workshops, came a new concept. It was a long chassis, on multiple axles, with a hitch and PTO driven auger installed along a vee-bottomed bin and it enabled farmers to temporarily hold up to 2000-3000 bushels. The bin could be moved closer to the harvester, even when partially filled, and have a higher discharge rate into the truck when the truck returned from the elevator. This innovation also shortened the grain cart’s round trip time to empty the combine tank. Eventually the entire harvest operation relied on, and revolved around, the mother bin.

The North American developed and constructed Walkabout® Mother Bin has learned from the Australian experience, but has added American sophistication not found in Australia. It has a simple, yet sophisticated, steering system and it allows users to confidently tow the bin on narrow roads. The Walkabout® Mother Bin has a fully independent and controllable rear steer setup that gets users off the road and into the field with ease. Further, it can be fitted with scales, a vibrator for high moisture grain and a remote cutoff on the discharge auger. The Walkabout® Mother Bin holds 4000-bushels of grain, allowing the grain cart to fully offload into the Mother Bin and head back to the field, keeping the combine running. Whether combining corn, soybeans, wheat, rice or barley, a Walkabout Mother Bin improves harvest productivity and efficiency for any size farming operation. 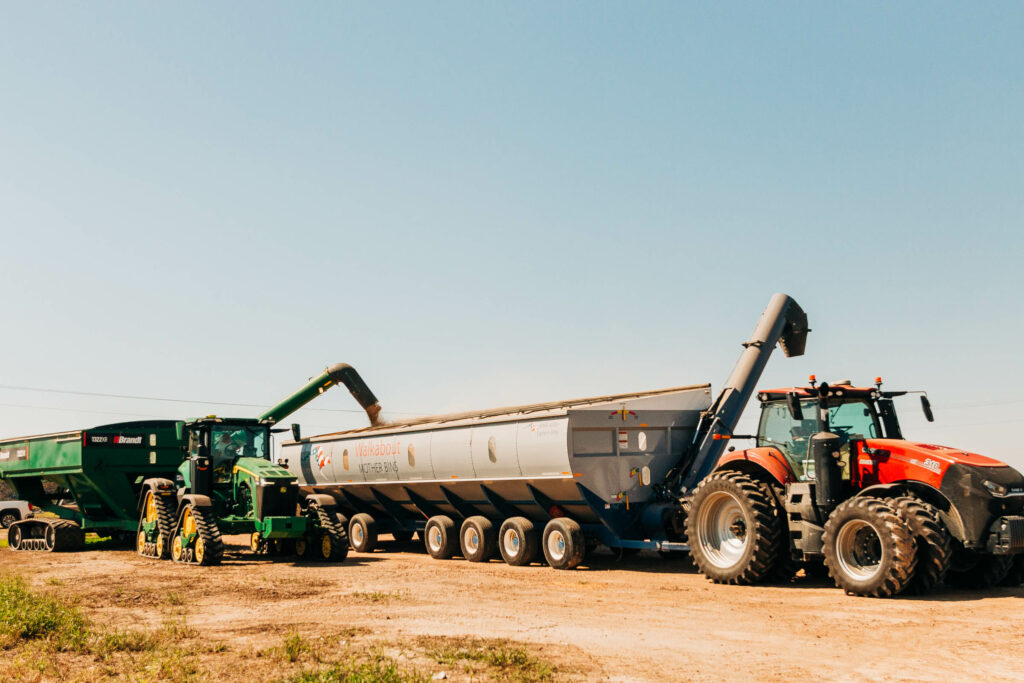 Walkabout Mother Bin user Travis Miller, Deschler, Nebraska said “Before the Mother Bin we’d have both combines full, all three grain carts full and have to stop and wait for at least an hour, an hour and a half. With the Mother Bin on the edge of the field the grain carts would come up, dump and then go right back out and unload that combine again.”

Walkabout Mother Bin customer Peyton Potter said “The Mother Bin allowed us to reduce the number of trucks we own and combine more grain faster because the combines never stop. We farm with less equipment, and finish earlier than before, and it’s because of the Mother Bin. We run like clockwork.”

A Walkabout® Mother Bin acts as a surge tank for grain when trucks can’t keep up with combine and grain cart holding capacity. It allows farmers to operate with less help and less equipment because it holds 4 to 6 semi loads of grain* (allowing a reduction in trucks and/or employees.)

Think of it as the missing link between grain carts and trucks. The Walkabout® Mother Bin is essential harvesting equipment and no, you don’t need another grain cart or truck.

*depending on size of semi