PENDLETON — Towering over a field at Jones & Jones Ranch outside of Pendleton, the 58-foot-long and nearly 13-foot-tall mother bin dwarfed its attached tractor during a recent field day demonstration hosted by Walkabout Mother Bins and FEI, Inc.

“The idea of the mother bin is to constantly keep your combines and your grain carts running and your trucks running,” said Crystal Kopecky, director of sales at Walkabout Mother Bins.

Based in Faulkton, South Dakota, Walkabout Mother Bins has been pioneering the concept of the mother bin in the United States since its start several years ago. While new to the U.S., the concept of the mother bin has been around in Australia since at least the early 1980s, said Kopecky. Born out of labor shortages, the colossal piece of farm equipment helped cut down on harvest times and save money by creating a site for temporary storage of grain prior to transport away from the field.

“This allows you to keep up if you’re not keeping up,” Kopecky said. “But if your operation is keeping up it will allow you to reduce your trucks and labor needs.”

With a capacity of more than 4,000 bushels, the mother bin sits on the edge of the field and acts as a temporary storage facility for grain to pick up slack between combines and semitrucks hauling grain to storage. Combines fill bankout wagons, which in turn fill the mother bin for holding until it can be transported. From there a 22-inch auger can load a semitruck in mere minutes.
“Equipment nowadays, especially your combines, they’re built bigger and they’re built to operate faster,” Kopecky said. “Over time, as these combines have increased their capacity and their ability to combine faster, the only thing that hasn’t changed is how we haul it away.”

For Keegan Jones, of Jones & Jones Ranch, the mother bin did just that. Jones, who received a mother bin from Walkabout 10 days into his roughly 40-day harvest last year, saw the hefty piece of equipment cut nearly three days off of his harvest. 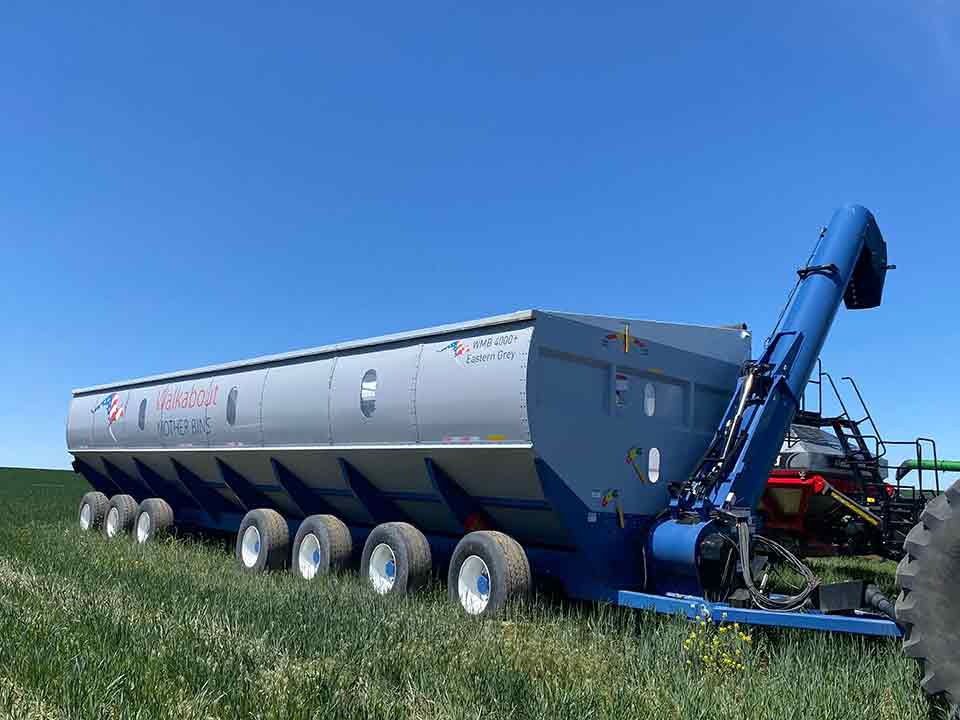 “We were about halfway through our harvest when we received the mother bin and we were able to just add it right into our system,” he said. “It was like adding another combine. It really picked up the slack because of the extra surge capacity.”

Jones said he estimates his two-combine harvest usually costs about $10,000 a day, so the savings amounted to nearly $30,000 in the first year alone.

“So you’re basically spending $10,000 a day to keep your crew and everything going — combines and all that stuff rolling,” he said. “So if you have some of that sitting or if you shave off some time, then you have some savings.”
That time was saved by allowing combines to run almost constantly. Jones said the field-side storage solution allowed him to harvest later in the evening and have a supply of grain ready for trucks to transport first thing in the morning.

“It just kind of streamlined the whole operation,” he said. “The main thing is to not shut down those combines.”

FEI, Inc., which is based in Yakima, Washington, and is the regional distributor for Walkabout Mother Bins, has sold two of the bins to operations in the Pacific Northwest, one going to Jones and the other near Helix, according to Bill Nice, the Pacific Northwest territory manager for FEI, Inc.

“It’s a fairly affordable thing when you think about how much more efficient it makes your combine,” Jones said.