Turns out, Dave Hedt, president and CEO of Walkabout Mother Bins, is not the only member of his family to build innovative farm equipment for harvest. “Back in the day” his father, Brian, and his uncle Max, built a machine to help Australian farmers “vacuum up” medicago ssp – an annual that’s a close relative of alfalfa and sweet clover. We’ll let Brian tell the story in his own words.

Australia has the oldest and poorest agricultural soils in the world and is the 2nd driest continent on earth after Antarctica. Following the 1930s depression which devastated our farming communities (think Grapes of Wrath without most of the corporate exploitation) Australian farmers needed a low cost, sustainable way to build productivity. Our ag scientist’s “brief” was to find a plant, or plants, capable of fixing atmospheric nitrogen, that produced high quality pasture for sheep and cattle, was self seeding and would adapt to our highly alkaline, low carbon soils in a winter dominant, low rainfall, environment. Easy hey?

The search was quickly concluded as a result of the first settler’s actions 150 years earlier. The early influx of these Europeans arrived in Australia seeking the same freedoms and independence as those who came to North America. They brought their animals, particularly horses, cattle and sheep. Their journey often began in the Eastern and central Mediterranean where hay for animals was loaded prior to departure. Being a journey subject to the whims of the wind it could take up to 4 months to complete and it required stops in Cape Town, South Africa and sometimes elsewhere in the Indian Ocean to restock both water and feed for the animals on board, as well as the intrepid emigrants.

The need to carry stockfeed was serendipitous as the animals not only carried a small, slightly prickly seed pod in their wool or hair but also in the hay brought on board. That particular burr was the seed pod of an annual legume that originated in what is commonly known as the Fertile Crescent (a region that includes the modern day countries of Iraq, Syria, Lebanon, Palestine, Israel, Jordan, and Egypt, together with the northern region of Kuwait, southeastern region of Turkey and the western portion of Iran and Cyprus). The Fertile Crescent is arguably the cradle of civilian because of its plant diversity. Archaeological evidence suggests that was where agriculture was first practiced.

The little seed pod had managed to find its way around the entire Mediterranean, down to Southern Africa and then to Australia. Happily for the seed pod, much of the Australian climate and soils are not dissimilar to those of the Fertile Crescent/Mediterranean.

The plant’s botanical name is medicago ssp. It is an annual. It’s a close relative of alfalfa (which is a perennial medicago) and sweet clover (a semi annual medicago) both well known in North America.

During the early days of Australian settlement those insignificant little plants adapted and quickly spread across Australia’s vast inland grazing regions, thanks primarily to the highly mobile, hardy and ubiquitous kangaroo.

Farmers and graziers already had an inkling regarding the benefits of the plants. Where the plants grew one year, a better wheat crop grew the next; but farmers didn’t understand the mechanisms. (We had a neighbor whose father, in the 1920s, would go out in late summer with a horse and cart, sweep up the seed pods, shovel them onto the cart and take the loaded cart to another part of his farm and sling the pods vigorously with a shovel across what he knew to be the poorest producing area of that field.)

In the late 1940s there was a search for the best producing annual medic. The search came to Jemalong Sheep Station, some 33,000 acres on what was then the edge of the Australian outback. A particular annual medicago iteration (and there are 1000s) was identified as a prolific producer of highly nutritious vegetation and seed pods. It also happened to have few soft spines and thus did not overly contaminate the highly sort-after wool from the Merino sheep.

The uniqueness of these plants (apart from their capacity to fix atmospheric nitrogen, grow in low rainfall, endure poor fertility, tolerate highly alkaline soils and reseed itself) extended to its growth habit. Extremely prostrate, it has a taproot and grows from a crown. It has about four to six ground hugging runners, each can be two to three feet long and is covered in trifoliate leaves (like a three leaf clover). When grazed, animals are unable to uproot it and it responds to grazing by producing more leafy side runners. In a good spring, an ungrazed stand is like walking on a four to six inch thick foam rubber mattress.

The one major downside of the wonderful plant is its propensity to dehisce. What the heck is that? Broadly speaking it is the tendency for a maturing plant to naturally open its seed pod and release its seeds. In the case of annual medics it actually drops its entire seed pod from the maturing runners. No amount of breeding effort could solve that, so early attempts to harvest the seed were horrendously slow, dirty and damaging to the field on which it was grown. But the value of the seed made it all worthwhile.

Initially harvesting the plant meant raking away the dry vines from the matured plant and then literally sweeping the field with industrial ground driven brooms and dumping into a tipping truck. When full of pods, straw, dirt and a few small rocks, the truck would drive to a stationary thrashing machine designed to separate the pods before thrashing the seed from them. The machine was hand fed by a man with an 8 pronged chaff fork.

Some inventors even wrapped sheep skins around three inch diameter wooden rollers hoping to have the slightly spiny pods lodge in the wool to be stripped off as it rolled across the field. Such was the value of the seed.
In Western Australia one farmer decided to try vacuuming the pods up and it was so successful a prominent Australian farm equipment manufacturer took the design and successfully commercialized it. Hundreds of the machines were built. They had a rated capacity of 300 lbs. of seed per hour and required 50 pto hp to drive them. Reliability was ok, but because the machines sucked up large quantities of dirt with the pods they had high wear rates. The sample off of the machine was often up to 50% fine dirt. The field sample was then transported to a precision cleaning plant to be cleaned of all contamination until it reached 99.5>% purity. 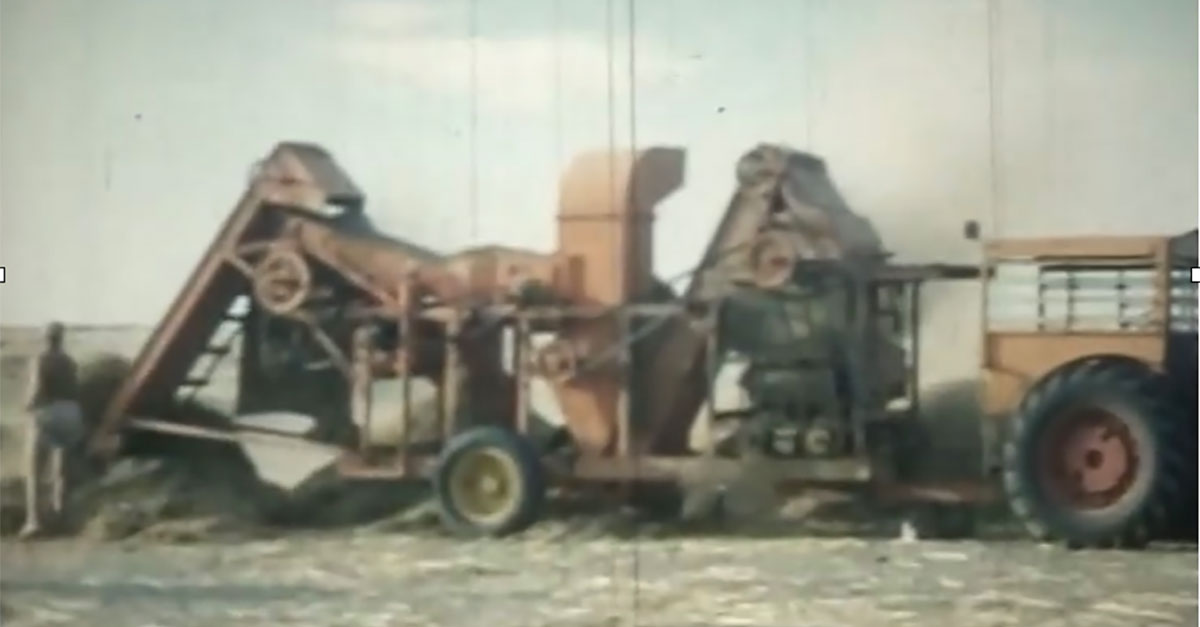 We owned one of those little machines but became frustrated with its inefficiencies so in 1985 we decided to build our own. The parameters were as follows:
1. Eliminate all dirt, foreign seeds and straw before thrashing the seed from the pods;
2. increase the hourly production 10 fold to 3000 lb/hr; and
3. produce an ex-the-field sample in the 80 to 90% purity range.

In 1991 my brother and I separated our joint farming operations. I continued to develop the machine, making substantial changes to the pre-cleaner, many smaller components and a revolutionary redesign of the thrasher. With those changes my team and I have recorded production outcomes in excess of 4500 lb/hr and seed deliveries to the cleaning plant with over 95% purity. All of that with extremely low wear rates and great reliability.

Fast forward to today, my GX-F* and I sold the machine, and the seed cleaning plant/seed sales business we built around it, in 1998 but continued to control the machine under contract until 2002. For 15 years we lost track of the machine until it was acquired by a nearby farmer. I am delighted to say that he continues to consult me on its nuances and together we have made additional capacity improvements. 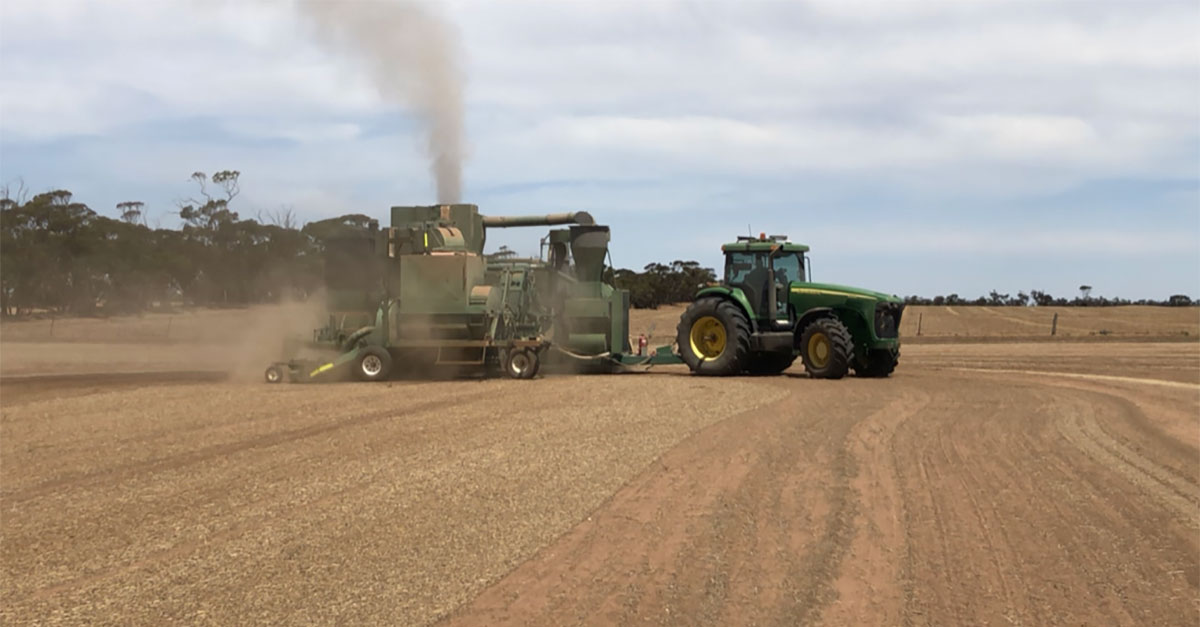 2021 a Clean field after pods have been vacuumed up.

Here are some facts and figures, please bear in mind that this was a project that started 35 years ago:

We estimate that between 1985 and 2002 we spent around $1million and 17,000 hours designing, redesigning, constructing, reconstructing, modifying and operating this machine.

We unofficially called ourselves “eyeball engineers” and described our efforts as “accelerated development” because we would make significant design changes in the off season, then get into the field and realize they weren’t going to work. We would rush the machine back to the workshop and modify it again and again whilst attempting to get the crop harvested before the seasons changed. We estimated we had almost an entire other machine in the scrap heap!

The machine became so efficient that for several years in the late 1990s it produced close to half the worlds annual medic seed. This gee-wiz statistic makes us look like big fish in a little sea, but with a world market of just 3,300,000 lbs I prefer to think we were minnows in a thimble.

If you are still reading this story I commend your perseverance and I trust you have found the tale interesting. There is so much more to explain, but nobody has much interest in these wonderful little plants, or the method of harvesting them, anymore because plant breeders have provided us with many more options that can be profitably produced with conventional harvesting equipment. Where once we grew medics in rotation, we now grow lentils, canola, barley, peas, beans, chickpeas, wheat and more…and there is not an animal to be seen in a field for miles.

This too is why Mother Bins have become a common sight in the fields of Australian farmers and why, as I write this, they are beginning to take their inevitable place in North American grain fields.

Have a great harvest! Should any of my seven regular readers have questions, or want additional explanations, I am happy to attempt to answer them.

*GX-F Gorgeous ex fiancée
**Parasitic load is defined as the HP required to run the machine at its operational speed without loading it with material.