October is manufacturing month and Mother Bins is featured on the Faulkton Area Economic Development page. The copy is below or you can view the original article here: www.faulktonsd.com/

With Manufacturing Month kicking off October 1, Faulkton Area Economic Development finds this the perfect time to spotlight one of Faulkton’s entrepreneurial innovators: Mr. Dave Hedt, Owner/President of Walkabout Mother Bins and Outback Wrap — a native-born Australian turned resident and active community member of Faulkton, South Dakota. Mr. Hedt grew up in Victoria, about four hours northwest of Melbourne, and has an extensive background in agriculture because of his family’s farm there.

Walkabout Mother Bins (WMB) ushered in a new era of harvest efficiency across the USA and North America with its founding in 2015 in Faulkton. Walkabout Mother Bins are large, portable, in-field grain storage bins that provide farmers with an efficient and affordable grain storage harvest system – a missing link between grain carts and trucks. It’s a technology system that was developed in Australia in the 1990s.

“A Walkabout Mother Bin brings a tried and tested Australian concept to North America with the added advantage of being adapted for North American conditions,” said Mr. Hedt. “With the ever increasing yields and farm sizes, and the reduction in labor forces due to shrinking rural communities, the Mother Bin fills in a gap where labor is hard to find and at the same time generates massive amounts of efficiency during harvest.” 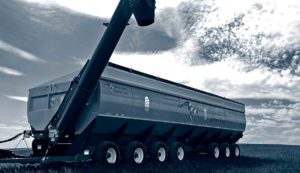 “Mother Bins are currently novel in North America, but have been standard in Australia for almost three decades,” said Mr. Hedt. “I would like to say that we are still in the ‘early adopter’ stage, but farmers are quickly realizing the benefits of this ‘Swiss Army knife’ style product that’s able to be used for a range of things.”

“What U.S. farmers are going through now happened in Australia in the 80s when trucks became expensive to own and run, labor was hard to find, and lines at elevators became longer. With our six years of development and adoption to the U.S., within the next 1-3 years you will see Mother Bins become a necessary part of North American farming. We are already planning to triple production in 2022, and triple again in 2023.”

One reason Mr. Hedt chose Faulkton as the headquarters for his business was because of the people. Mr. Hedt met a Faulkton resident in a pub, and after accepting an invitation to visit, made really good friends that brought him back summer after summer.

“We are growing at an unprecedented rate, and Faulkton is an amazing place to live and be based,” said Mr. Hedt. “I moved across the world to be here because of the community and people. The best thing about doing business in Faulkton is that as a larger company, we get to see the direct results from generating good paying jobs in a small town. The people I get to work with every day are my friends. The ability to walk into other businesses like the bank and not have to explain what you do or what you need is a definite advantage.”

And Mr. Hedt is not done innovating to solve common problems that farmers face. Every Walkabout Mother Bin comes with Outback Wrap, an easy-to-install, durable hydraulic hose identification system that simplifies the process of connecting farming equipment to tractors. As the name implies, you simply wrap the coils around the hoses, no tools required. Outback Wraps can also be purchased separately from the Mother Bins. Recently released is the Outback Wrap Hose Tamer. This Hose Honcho can bundle up to 14 hoses to keep them out of the way.

“The thing I tell people is ‘Why wouldn’t you want to make the place you live better?’ and that is something we strive for every day,” said Mr. Hedt.